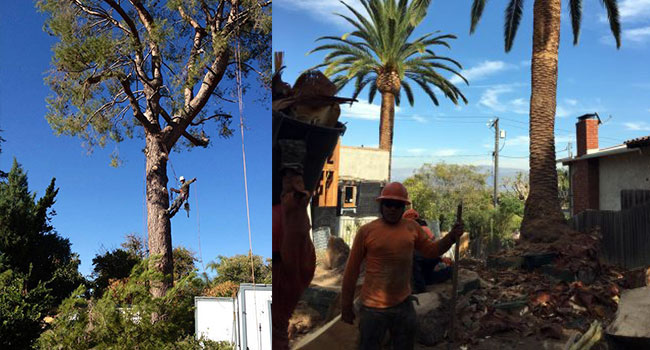 Healthy trees grow at a regular rate each year, and they can sometimes grow out in unusual positions, or may start to flourish in a particular area which is inconvenient for the garden owner. Tree pruning and trimming helps to keep trees down to a pleasing level, and can also help them to become stronger, better-looking trees. There are several reasons why your trees should be handled carefully with the help of expert Tree trimming services in Van Nuys, who can provide the care and expertise that trees need to become strong.

Trees which continually grow upwards and outwards tend to form weak capillaries at their extremities. Trees can become unhealthy if they are allowed to grow too far, and pruning or trimming actually helps to keep them in place. If the tree is not pruned, then there is a significantly higher chance of it becoming diseased, and it is also more likely to be damaged by storms and winds. This means that trimming trees to reduce their size or height can benefit them, and will not discourage them from growing again.

Trees that have become overgrown tend to have less resistance to disease. This means that they are more likely to struggle with limbs that are diseased, or which are so weak that they are easily broken. Trees in this condition present a danger to people standing near to them, and they are more likely to die than well-pruned or trimmed trees. This is why taking the effort to employ Tree Trimming Services in Van Nuys is the best way to make sure that the tree survives for next year, and is not damaged during the winter.

What to expect from trimming

Trimming a tree can involve cutting down the top of the tree, known as pollarding or topping. It can also involve work with densely packed limbs. Trimming teams will often cut back limbs with a narrow crotch, known as a V crotch. These tend to make the tree weak, and should be removed at an early stage. Cutting back large branches which are unsupported can be a way to ensure that the tree will not be damaged during the winter. Smaller branches can also be removed if they are likely to be a problem in years to come, and the growth at the end of branches can be pruned to prevent it from becoming too heavy to manage.

Please complete our form and we will follow up with you within 30 minutes.